Since becoming a MotoGP race venue, the world has increasingly highlighted the Mandalika name. Not only because of the presence of a magnificent circuit, but Mandalika also offers interesting beaches, natural and cultural tourist destinations. The following are recommendations for tourist spots around the Mandalika circuit that must be visited.

The Mandalika Circuit in Lombok further catapulted this beautiful island to the world. Visitors are curious not only about the circuit’s beauty but also about the destinations around it that turn out to be enchanting. What are the best recommendations for tourists?

Lombok Island is a paradise for beach tourism, one of which is close to Mandalika, namely Tanjung Aan Beach or simply Aan Beach. The texture of its sand is similar to pepper grains, so it is very noticeable when walking barefoot.

Although the size of the sand is larger than beach sand in general, it still feels smooth when stepped on and touched. There are many beach lounge chairs with thatched roofs for tourists to rest.

Not far from Tanjung Aan Beach, there is a hill called Merese, often used for grazing livestock by local residents. Merese Hill is an interesting and challenging destination to visit.

Visitors will be presented with the experience of climbing the hill along the vast green meadows. From the top of the mountain, you can see the expanse of the blue sea with the waves crashing one after another. Waiting for the moment of sunset and sunrise at Merese Hill is also recommended. 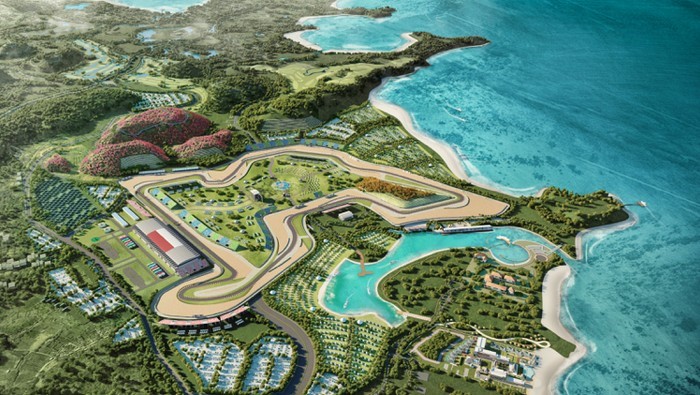 Another tourist destination quite close to the Mandalika Circuit is Seger Hill, a small green hill that is safe to climb. Tourists can enjoy the greenery of the trees, the view of the smaller hills, the expanse of the sea and the view of the MotoGP racing circuit.

Not far from Bukit Seger, there is Seger Beach which has a unique rock called Batu Tengkong. Its uniqueness is in the shape of the coral that resembles a mushroom. Both Seger Hill and Seger Beach are two tourist spots located on the west side of Mandalika Circuit.

Not only in Bali but visitors to Mandalika can also find Kuta Beach on the island of Lombok. In addition to the clear sea water and clean white sand, Kuta Lombok Beach is further enhanced by the green hills along the right and left sides.

Meanwhile, not far from Kuta Beach, there is Mandalika Beach which offers a calm atmosphere. The two beaches have a charm almost the same as the beaches on Borneo island, for example, the beaches on Biduk-Biduk Island, Sangalaki, Kaniungan and Manimbora.

The cultural tourism of Mandalika is also exciting. One of the recommended ones is Sade Tourism Village, which still maintains the integrity of Lombok’s culture well. Sade Village is the right choice to get acquainted with the culture of the Sasak Tribe, the indigenous people who live there.

Lombok Island is known to have many beautiful tourist destinations and has been increasingly recognized by the world since the presence of the Mandalika Circuit. The splendor of the circuit is a new attraction, but the surrounding tourist attractions are why tourists want to visit Mandalika even though there is no race.